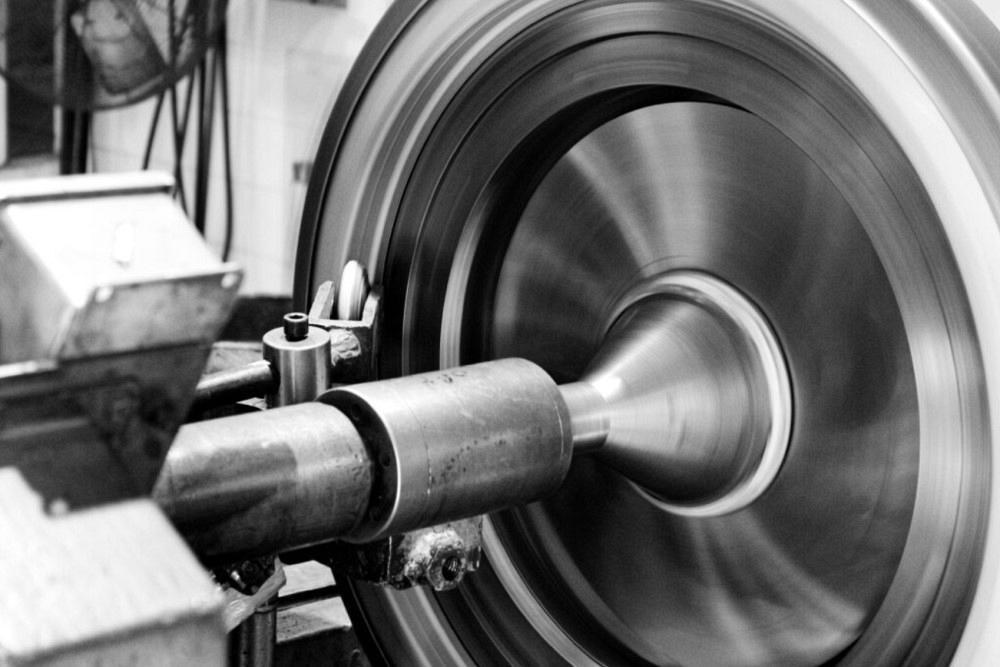 A roller attached to a lever arm creates a form near the outside diameter of a spin part. Basic tooling elements most spinning operations require include a mandrel, a follower that holds the metal, a roller and lever arm to form the part, and a trimming tool. Images: Toledo Metal Spinning Co.

Toledo Metal Spinning Co.’s product mix evolution might not be typical, but it isn’t unique in the metal forming and fabricating job shop arena. The Toledo, Ohio-based shop began producing custom work and became known for producing certain types of products. As demand rose, it launched several standard products based on popular configurations.

Having a mix of make-to-order and make-to-stock work helped level-load the shop. Repeat work also opened the door to robotics and other types of automation. Revenues and profits rose, and all seemed right with the world.

Still, was the business growing as fast as it could? Leaders at the 45-employee shop knew the organization had more potential, especially when they saw how sales engineers were spending their days. Although TMS offered several product lines, many products couldn’t simply be pulled from finished-goods inventory and shipped. They were configured to order. This meant sales engineers spent a lot of their days preparing paperwork for hopper orders, specifying a ferrule here, a specific fitting or polish there.

TMS effectively had an engineering constraint, and to free it, this year the company launched a product configuration system. Custom software, designed on top of SolidWorks, allows customers to configure their own products and receive a quote online. Such front-office automation should streamline order processing and, most important, free sales engineers to tackle more custom work. In short, the tool should help boost quoting and engineering efficiency, which is a good thing. After all, the less effective engineering and quoting are, the harder it is for a shop to grow.

TMS traces its roots back to the 1920s and a German immigrant named Rudolph Bruehner. He owned the company from 1929 to 1964, employing skilled metal spinners who, over years of experience working with a lathe and leverage, perfected the spinning craft. The lathe spun the blank, and a metal spinner used leverage to press a roller against the workpiece to shape it against a mandrel.

TMS eventually expanded into deep drawing to produce stamped components, as well as pre-forms for spinning. The drawing press stamps a pre-form that is then mounted onto a spinning lathe. Starting with a pre-form instead of a flat blank allows the material to be spun to greater depths and smaller diameters.

Today TMS remains a family business, but it’s not a Bruehner family business. The company changed hands in 1964 when Bruehner sold it to Ken and Bill Fankauser, not lifelong sheet metal workers from the Old Country, but an engineer and an accountant. Ken’s son and current TMS Vice President Eric Fankhauser relayed the story.

“As a young accountant, my dad was given the [TMS] account from one of his friends who worked at the accounting firm Ernst and Ernst. My dad audited the plant and the company, and he did such a good job, Rudy sent him a check for $100. That put my dad in a quandary. It would have been a conflict of interest if he cashed that check. So, he went to the partners of Ernst and Ernst and asked what to do, and they told him to endorse the check over to the partners. He did that, and when the check cleared, and Rudy saw that he endorsed the check to the firm, Rudy got really upset. He called my dad into his office and told him he was upset he didn’t keep the money. My dad explained to him that it was a conflict of interest.

“Rudy thought about it, then eventually said, ‘You’re the type of guy I’d like to have own this company. Would you be interested in buying it?’”

Ken Fankhauser thought on it, then called his brother Bill, who at the time was an aeronautical engineer at Boeing in Seattle. As Eric recalled, “My uncle Bill flew in, looked at the company, and they decided to buy it. The rest is history.”

When Ken and Bill purchased TMS in the 1960s, they took ownership of a shop full of old-school, belt-driven machines. But they also came to the business at an opportune time, when metal spinning (and manufacturing machinery in general) was transitioning away from manual operation and toward programmable control.

In the 1960s the two purchased a Leifeld template-driven spinning lathe, roughly analogous to old-school, template-driven punch presses. The operator manipulated a joystick that drove a stylus over a template that was in the shape of the spun part. “That was the start of automation at TMS,” said Eric’s brother Craig, TMS’s current vice president of sales.

Technology at the company progressed through different types of template-driven spinning lathes, eventually progressing to the computer-controlled machines that the shop uses today. Still, several aspects of metal spinning set it apart from other processes. First, even the most modern systems can’t be run successfully by someone who doesn’t know the fundamentals of spinning.

“You can’t just put a blank in and have the machine automatically spin the part based on its drawing,” Eric said, adding that operators need to create a new part program by manipulating a joystick, which adjusts the roller position as it makes passes over the work. It usually makes multiple passes, but it could make just one, such as in a shear-forming operation, which can thin (or “shear”) material to just half its thickness. The metal itself “grows” or elongates in the direction of spinning.

“Every type of metal is different, and there are variabilities even within the same type of metal, including hardness and tensile strength,” Craig said. “More than that, the metal heats while you spin it, and that heat is transferred to the tool. When the steel warms, it expands. All these variables mean that a skilled operator needs to keep an eye on the job.”

One TMS employee kept his eye on the job for 67 years. “His name was Al,” Eric said, “and he didn’t retire until he was about 86 years old.” Al began when the shop lathes ran from belts tied to an overhead shaft. He retired from a shop with the latest in programmable spinning.

Today the shop has a few employees who have been with the company more than 30 years, others more than 20, and those trained in the spinning craft work both manual and automated processes. If the shop needs to produce a somewhat simple, one-off spun part, it still makes sense for a spinner to fire up the manual lathe.

That said, the company still is an aggressive automation adopter, as evident by its use of robotics in grinding and polishing. “We have three robots in-house that perform polishing,” Eric said. “Two of them are designed to polish on the vertical axis, one on the horizontal axis.”

The shop employs a robotics engineer who teaches each robot routines to grind specific shapes, using finger belt (Dynabrade-type) tools, as well as various other belt grinders. Programming the robots is a subtle affair, especially considering the different grits involved, the number of passes, and different pressures the robots apply.

Scientists are getting better at characterizing exoplanets, and that's leading to some surprising discoveries. As Reuters reports, a DLR-led...

By Mai Nguyen Dec 2 (Reuters) - Aluminium prices in London eased on Thursday, hit by worries over the...

Germ-killing copper to be installed on Toronto and Vancouver transit