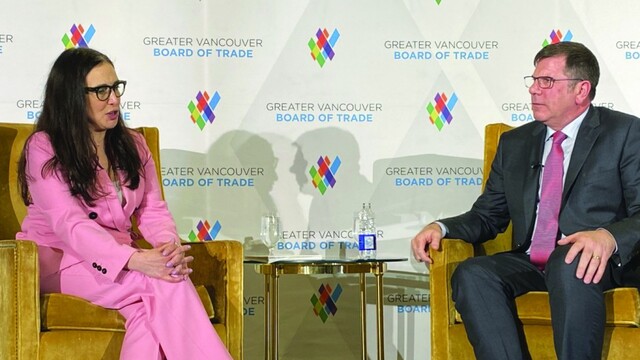 In 2014, the Stephen Harper Conservative government rejected the New Prosperity mine project, said to be one of Canada’s largest undeveloped copper deposits.

Now, the Justin Trudeau government is so anxious to secure a domestic supply of critical minerals and metals, including copper, that it earmarked $3.8 billion in the recent federal budget to implement a new critical minerals strategy.

The strategy, which Parliament hasn’t formally implemented yet, will cover 31 critical metals and minerals needed for energy transition, defence, aerospace, communications and high tech. The B.C. government is also expected to develop a critical metals strategy.

The federal strategy’s goal is not only to secure a domestic supply of critical minerals, but also to develop a full supply chain, which may include development of greater refining, smelting, manufacturing and recycling capacity.

“I see this as a generational opportunity for the country and for the province,” said Geoscience BC president and CEO Gavin Dirom. “This kind of funding hasn’t been allocated to a geoscience undertaking or minerals period since the ’90s.”

The United States also has a critical minerals strategy, and the Canada-U.S. Joint Action Plan on Critical Minerals Collaboration could lead to U.S. investment flowing into Canadian critical minerals projects.

Some of the funding is expected to go to government geoscience agencies like the Geological Survey of Canada and Geoscience BC to develop critical minerals mapping.

Geoscience BC is collaborating with LithiumBank Resources (TSX-V:LBNK) and Natural Resources Canada to develop a database of oil and gas brines in northeastern B.C. that contain lithium. Geoscience BC is also investigating the potential for coal mines to produce some rare earths.

One important financial incentive in the federal budget is a 30 per cent mineral exploration tax credit for critical minerals.

For copper alone, there will be an estimated annual supply deficit of 4.7 million tonnes by 2030 globally if no new mines are built. Meeting that demand will require 35 more copper mines the size of B.C.’s Highland Valley copper mine globally in eight years, Goehring said.

Few countries are as vast and mineral rich as Canada, so critical mineral mining opportunities are significant, provided federal and provincial governments and Indigenous people can provide the right investment and regulatory environment.

B.C. is Canada’s largest copper producer, the only producer of molybdenum, and though it currently doesn’t produce nickel, it has in the past, and there are now two nickel projects in the early exploration and development stage in B.C.

Ontario, Quebec and Newfoundland have significant nickel and cobalt deposits, Saskatchewan has the largest high-grade uranium resources in the world, and Alberta and B.C. have the potential to produce lithium extracted from oilfield brines. As for Canada’s north, the Northwest Territories have “pretty well everything, if you can get access to it,” said Pierre Gratton, president and CEO of the Mining Association of Canada. “There isn’t really a place in Canada that can’t be part of this strategy.”

The problem for Canada, the U.S. and Europe, all of which are developing critical minerals strategies, is that no amount of money can buy time.

Emissions reductions targets set by numerous governments will require so much copper, cobalt, nickel, lithium and other critical metals for things like electric car batteries and wind turbines that the new mines needed to provide the raw materials probably can’t be built in time to meet the targets.

It takes 10 to 20 years to bring a mine from discovery to production, not just in Canada but elsewhere as well.

“We need to up our game and streamline our permitting process and make decisions faster,” Goehring said. “Mines have long lead times, and if we’re not able to improve our permitting processes, and we don’t engage [First Nations] in a more meaningful way, we will miss this opportunity. I think policymakers are starting to understand this challenge and are turning their attention towards it.”

While details of the federal critical minerals strategy won’t be fully known until it is formally approved by Parliament, there are expectations of some direct government investment in the form of equity or loans – “patient capital,” Gratton calls it – in certain types of mines and processing, like rare earths.

“Where you hear more about direct government involvement is in rare earths,” Gratton said. “Because for rare earths, China has control of the market. In the past, whenever the Chinese perceive a threat, they flood the market, prices collapse, mine goes out of business.

“It’s a very difficult market to get into because China controls it. They control the price and they’re state-run enterprises, so they don’t care about profit. They have these mines in China and elsewhere for strategic reasons. And we’re competing against that.”

Goehring said there is some urgency in getting new mines developed, so governments will need to streamline permitting processes.

“We’ve got four, five, six years, and those supply chains are starting to form, and we need to get Canada in that supply chain,” he said.

“We need Ford [NYSE:F] – all the North American automakers – to use Canadian battery metals in their batteries.”

He added that it will be critical to provide First Nations with funding to help them develop the kind of capacity that First Nations like the Tahltan have developed. This capacity is needed if First Nations are to deal with complex environmental permitting processes and to become participants and even equity partners in new mine projects.

“One thing that’s vital is we need to provide more funding to Indigenous partners to enhance their participation in the Impact Assessment Act and other regulatory processes so the nation will fully participate,” Goehring said. “Because that’s a roadblock. Policymakers are really going to have to come to terms with this challenge quickly.”

In addition to a number of major new copper mine projects in B.C., like the KSM project and the Highland Valley expansion – there are four critical minerals projects in the early exploration and development stage in B.C. They include: