Glencore’s Onaping Depth is a major new nickel and copper mine set to start production in 2024 but first discovered in 1994 located in the north-western portion of the Sudbury Igneous Complex (SIC) in Ontario, underneath the existing Craig mine but also near the Fraser mine and the Strathcona Mill. It is estimated to contain about 14 Mt of recoverable ore resources, grading 2.24% Ni and 1.01% Cu. Craig stopped producing in 2009.

The Onaping Depth mine will have a rock production capacity of 1.74 Mt/y which is waste and ore combined, of which some 1.4 Mt/y will be ore, constrained by the hoist capacity of 248 t/h, with the waste backfilled via an underground paste backfill plant. The Feasibility Study was completed at the end of 2016 and the mine received project approval of $700 million in December 2017. It is using a bottom-up mining approach supported by a single shaft development with a 100% battery electric operated mobile fleet. Glencore back in December 2020 announced its ambition to be a net-zero emissions company by 2050, including a commitment to reducing its total emissions footprint – Scope 1, 2 and 3 – by 40% by 2035 based on 2019 levels.

There is about 1 km between the Craig shaft and the Onaping Depth shaft (7.2 m diameter, 1,430 m deep) and the nickel-copper deposits themselves lie between 2,300 m and 2,700 m below surface. Two ramps have been driven from the old Craig mine workings starting at the 1200L and 1775L levels. The ramp starting at Craig’s 1775L finishes at Onaping Depth’s 1915L and is referred to as the 1915L ramp.

The 1200L ramp development started in late January 2017 while the 1915L development began in early February 2017. A shaft connects the two levels and is being extended down to approximately 2,630 m below surface. Additional infrastructure has been developed at 1440L where a ventilation shaft/second egress has been bored between 1440L and 1915L and down to the deposit workings.

The mine is going down to over 2,600 m and the decision to use trucking in addition to just ore passes is to guarantee the longevity of the vertical ore handling. The plan is to mine bottom up, so trucks can go uphill empty and regenerate batteries on the downhill fully loaded. 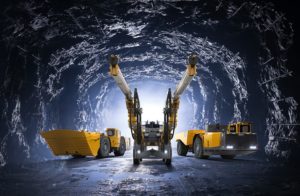 What is notable about Onaping Depth is that the all-electric project has been in advanced planning since 2015, well before any company-wide firm emissions commitments were made by Glencore and well before a lot of the machines set to be used were even available – so it was at the time a very forward thinking project. There has been a lot of talk about all electric mines in recent years, but to date a greenfield project with a 100% battery electric fleet including all ancillary machines – so zero emissions from an equipment standpoint – has yet to be built – though some like Borden have got very close. The Nussir ASA underground copper mine in Norway is also set to be all electric and come online in 2024, but main construction there has yet to start.

The planning for the mine and the early development has been conducted in tandem with the rapid development of the mine electrification industry in terms of mobile fleet, so in a sense this was a good thing as it has allowed the project to trial and test equipment to quantify the benefits as well as design the main around known parameters and known results.

However, things have moved on as the major underground BEV OEMs have now brought their full battery product lines to full commercialisation and in a presentation titled Building the mine of the future through Craig Mine – Onaping Depth Project in Sudbury given on 25 May at the ‘BEV In-Depth: Mines to Mobility’ conference in Sudbury, Peter Xavier, Vice President · Glencore, Sudbury Operations revealed the main fleet selection and justification behind it. The event was held at Science North, and hosted by Greater Sudbury Economic Development.

The mine will be using 5 m by 5 m headings, with 14 t LHDs and 40 t trucks as well as development drills, bolters, production drills and a range of support equipment including cassette carriers, personnel carriers, shotcreters, scissor lifts, boom trucks etc – in all IM understands that the mine will be using almost 70 mobile battery electric machines initially in addition to lithium battery locomotives for haulage at 1200L.

Xavier revealed that Epiroc has been selected for the primary fleet – namely Minetruck MT42 Battery underground trucks, Boomer E2 Battery development drills and Scooptram ST14 Battery loaders. He said this suite of primary machines was selected as the fleet “meets our duty and operational simulated requirements” and that Epiroc had scored high on safety, design and testing of the entire battery system (Epiroc machines use Northvolt batteries). Epiroc also offers large capacity batteries, uses a standard CCS charging protocol, has a battery swap system and with the designs being universal & compatible.

MacLean Engineering has been selected to supply utility machines including Boom Trucks and TM3 Transmixer EVs; with Kovatera for BEV personnel carriers including the KT200e. Glencore said both companies scored highly on safety, design and testing of the entire battery system, also use a standard CCS charging protocol and have onboard charging plus importantly the battery supplier for both is the same – Xalt.

Both the Xalt and Northvolt batteries use lithium-ion chemistry, have on-board battery management systems, integrated cooling systems and safety systems built into the design.