One of the primary targets will be to define areas of high-grade copper mineralization with the potential to produce direct shipping ore.

American West says this DSO material has no impurities and could form the basis for an inexpensive development option for Storm with a small environmental footprint.

This year’s drilling at Storm will focus on defining high-grade copper resources in previously drilling areas and exploring high-priority electromagnetic targets defined by geophysical surveys, including one completed by American West last year.

“The drill program has a dual strategy. Firstly, to define resources that may support an initial low-footprint mining proposal utilising a DSO model that produced a 53% Cu product in our initial test work,” said American West Metals Managing Director Dave O’Neill. “Secondly, to confirm the outstanding growth potential of the Project by identifying further, undiscovered zones of high-grade copper mineralisation in unexplored areas.”

Highlights from historical drilling at 2750N include:

American West says the copper mineralization at 2750N Zone, which remains open at depth and along strike, is likely to be well-suited for producing direct shipping copper ore with a sorter.

The company plans to complete roughly 1,500 meters of initial drilling in and around 2750N in holes that range between 100 and 150 meters to test the near-surface mineralization found there.

During 2021, American West carried out an electromagnetic geophysical survey that identified numerous conductive anomalies associated with copper mineralization at Storm.

This survey identified 14 untested conductors, seven of them shallow and seven that are deeper.

The seven previously undrilled shallow conductors are in close proximity to the bounding faults at Storm and in areas of elevated density identified by the 2017 airborne gravity gradiometry geophysical survey carried out in 2017.

The conductors east of the 2200N and 2750N zones are also associated with significant copper-in-soil geochemical anomalies. 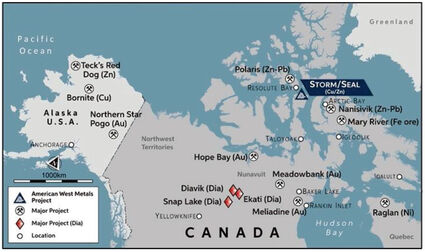 The company says the seven deeper conductors, which may represent the source of the near-surface high-grade copper confirmed by shallow drilling, represent compelling large-scale exploration targets that will be tested during the 2022 drill program.

“We are excited to have our earn-in partner American West so swiftly advance the Storm Project,” said Aston Bay Holdings CEO Thomas Ullrich. “The ground geophysical program completed last season has been instrumental in defining high-priority drill targets for this year, and the outstanding result of a (more than) 53% Cu direct ship product from ore-sorting tests conducted over the winter is conducive to low-impact mining.”

Over his more than 14 years of covering mining and mineral exploration, Shane has become renowned for his ability to report on the sector in a way that is technically sound enough to inform industry insiders while being easy to understand by a wider audience.