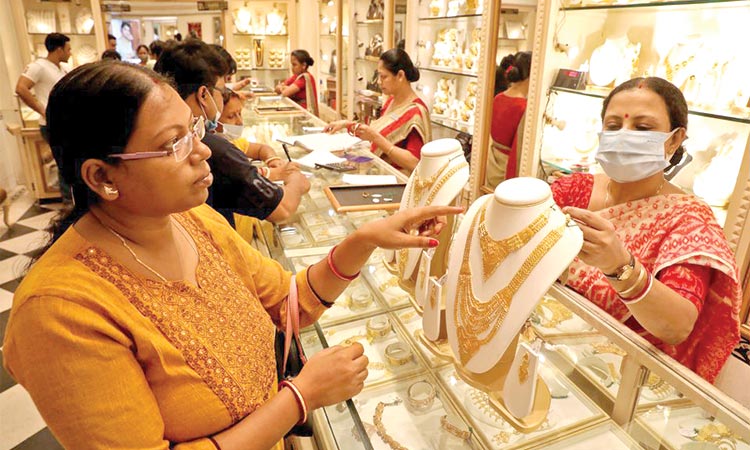 A customer checks a gold necklace at a jewellery showroom in Kolkata. File/Reuters

Indian gold prices hovered close to an over three-month peak of 53,113 rupees per 10 grams hit on Aug. 4.

Retail demand has been weak for the past few weeks as buyers were waiting for a correction, said Ashok Jain, proprietor of Mumbai-based wholesaler Chenaji Narsinghji.

Dealers offered discounts of up to $14 an ounce over official domestic prices – inclusive of 15% import and 3% sales levies – unchanged from last week.

Jewellers received good orders during last week’s The India International Jewellery Show and were hoping festival season could be good this year, said a Mumbai-based dealer with a private bank.

Chinese premiums narrowed to $5-$9 an ounce over international spot prices, from $4-$11 last week.

“As China continues to patrol near Taiwan, no one is importing large amounts and everyone is unsure about the implications” for China-US relations, said Bernard Sin, regional director, Greater China at MKS PAMP.

The People’s Bank of China controls how much gold enters China via quotas to commercial banks.

Hong Kong dealers sold gold between on par with the benchmark to $2 premiums.

“We could see elevated premiums for physical gold and silver for the rest of the year. While this could dampen demand in the short term, it would be easily overlooked by consumers if a repeat of the 2020 price rally happens,” said Vincent Tie, sales manager at Singapore dealer Silver Bullion.

Brian Lan, managing director at dealer GoldSilver Central, said wholesalers are ramping up purchases to prepare for upcoming festivities. They also need to pick up production and increase their range as the world opens up and more tourists come in, he added.

Meanwhile, gold prices drifted higher on Friday helped by a drop in US Treasury yields and setting the metal on path for a fourth straight week of gains, as investors took stock of the recent inflation data out of the United States. Spot gold rose 0.5% to $1,798.86 per ounce by 1800 GMT and was headed for a more than 1% weekly rise. US gold futures also settled up 0.5% at $1,815.5. “Currently the gold market is seeing some short-covering and is supported by lower yields,” said Bart Melek, head of commodity strategy at TD Securities. US Treasury yields dipped after a volatile week as investors evaluated whether an apparent slowdown in inflation increases could reduce the speed of Federal Reserve interest rate hikes.

Data released earlier this week indicated that inflation in the US has cooled down, following which market participants toned down expectations of an aggressive rate hike by the Fed. However, recent Fed commentary continues to be hawkish and have stopped the metal from breaking above the $1,800 level. “gold’s rally, after cooler CPI numbers, stopped in its tracks as the market believes inflation will continue to be a problem. Fed speakers have also suggested they can’t afford to relinquish the fight against inflation,” Melek added.

gold tends to do well in a low-interest environment as it yields no interest. “Rising risk appetite as seen through surging stocks and bond yields … have so far prevented the yellow metal from making a decisive challenge at key resistance above $1,800,” Saxo Bank analyst Ole Hansen said.

Soft copper falls: Copper fell on Friday as the dollar strengthened and data showed a decline in Chinese bank lending, but prices were still set to end the week up 3% as bets that US inflation may have peaked powered a broad shift towards riskier assets.

Other industrial metals also slipped but were up 1-5% this week after the inflation figures suggested the US Federal Reserve may need fewer interest rate rises, causing less economic damage.

Prices are up about 16% from a low in mid-July but a global economic slowdown still means the metal used in the power and construction industries has lost 25% from its March peak.

Data on Friday showed that new bank lending in China, the biggest metals consumer, tumbled more than expected in July, a bad sign for metals demand.

Global stock markets headed for a fourth week of gains.

Aluminum on Friday gave up its gains after Thursday’s record surge, with the London Metal Exchange’s (LME) plan to...

The dynamics of climate-related inflation

The Russian invasion has pushed the world into inflation levels unseen since 1981. Three distinct but interrelated phenomena are...

We Think Jiangxi Copper (HKG:358) Is Taking Some Risk With Its Debt

David Iben put it well when he said, 'Volatility is not a risk we care about. What we care...

The Recycle Bin: Disposing of ash can be more complicated than it seems

Following the demise of good quality fuels, copper production was not renewed in the area until about a thousand...